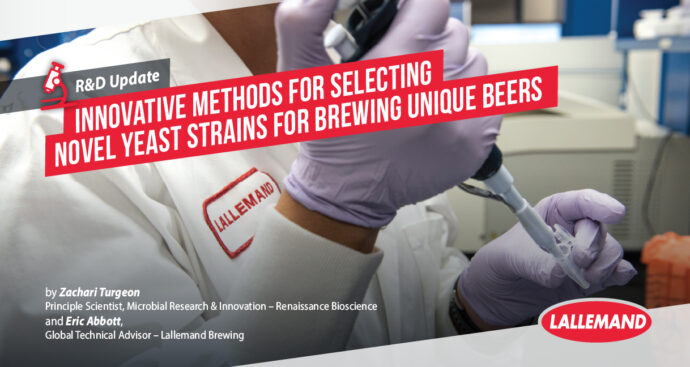 Yeast scientists use an incredible set of tools to select novel strains of brewing yeast. These tools vary from simple selective culturing techniques all the way to cutting-edge gene-editing technologies. Each method has its advantages and disadvantages, as well as its technical limitations. Below we will compare the major strain development methodologies with a focus on brewing applications.

The first two methods result in strains that are non-GMO whereas the third category results in bioengineered strains considered to be GMOs.

Bioprospecting is simply the isolation of yeast strains from different environments (fruits, trees, flowers, or brewery environments). Most commercially available brewer’s yeast strains have been isolated in this way, a recent example being WildBrew Philly Sour™, which was isolated from a dogwood tree in Philadelphia (PA). Some yeast suppliers will even disclose the brewery from which the yeast strain was originally isolated, such as LalBrew Verdant IPA™ (Verdant Brewing Company, UK), or LalBrew Voss™ (Sigmund Gjernes, Norway). This method is simple and requires minimal lab equipment. Some drawbacks are that most strains will not produce good beer, so many strains need to be screened. Whole organism strain selection includes adaptive laboratory evolution (ALE) and selective breeding. ALE involves continuously culturing a yeast strain in a highly selective environment for hundreds (even thousands) of generations, allowing the yeast cells to slowly adapt to the stressful environment. The resulting yeast has amassed genetic changes which correspond to targeted improvements in performance. Using ALE, any yeast strain can be potentially improved given the right ALE conditions. The main drawbacks of ALE are that it is time-consuming (months to years), requires sophisticated laboratory equipment, and may lead to other undesirable changes to the yeast strain.

The second whole organism strain selection approach is selective breeding. Just as hop breeders use selective breeding to produce unique varieties of hops, yeast geneticists can cross breed yeast to produce novel strains with desirable traits. Brewer’s yeast has two mating types (analogous to two sexes). When two cells of opposite mating type get together they physically fuse together to produce a hybrid cell that contains one set of genes from each of the parental strains. These hybrid cells can then sporulate, allowing genes to be shuffled in a process called sexual recombination. While sexual reproduction and sporulation are able to quickly produce an incredible diversity of yeast strains, selective breeding of yeast has some major challenges. Many brewer’s yeast strains are sterile and have lost the ability to reproduce sexually and selective breeding requires sophisticated laboratory equipment to rapidly screen thousands of cells for multiple
different traits. LalBrew Farmhouse™ is a commercially available strain that was developed using this approach. Three parental strains were chosen with specific properties: (1) STA negative (non-diastatic), (2) Absence of hydrogen sulfide (H2S), and (3) A traditional Belgian Saison strain isolated from a well-known Belgian brewery. Strains 1 and 2 were selectively bred to
produce a non-diastatic hybrid that did not produce H2S. This strain was selectively bred with Strain 3 to produce LalBrew Farmhouse™, a non-diastatic strain with a traditional Saison flavor profile and no H2S production.

The final approach is gene-editing technology (GE), which involves the manipulation of DNA (genes) outside of the cell and then introducing this DNA into a yeast. The edited genes may be from the same species of brewer’s yeast or from completely unrelated species. The power of GE is that the possibilities for improving a strain or giving a strain new traits are almost endless. Using GE, scientists have been able to create brewer’s yeast that can produce lactic acid during primary fermentation (Mascoma Sourvisiae®) by introducing genes from lactic acid bacteria into brewer’s yeast, thereby removing the need to use bacteria for producing sour beers. The main drawbacks are consumer acceptance of GMOs and regulations that restrict their use in some regions, although
this is starting to change in recent years. In the future, the methods of bioprospecting, whole-organism strain selection, and gene-targeted strain engineering will undoubtedly lead to novel yeast strains that provide solutions to the modern brewer to continue to craft unique and high-quality beers.