Have You Ever Had A Senior Moment? We Bet You’ll Want One! 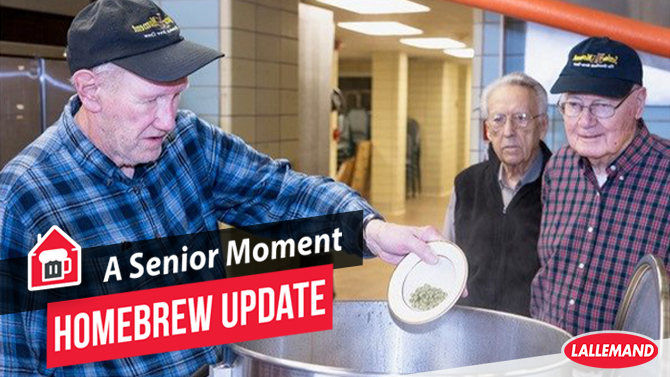 Welcome to The Overlook, a Retirement Community that serves residents sixty-two years and older. It is situated on 450 wooded acres in the rural town of Charlton, MA.

In 2016, Steven Dragon and his wife Dolores moved into this enclave, in part because The Overlook supported his idea of creating a resident run home brewing club. Thus, they began the “The Overlook Brew Crew.” Steve, a homebrewer for almost forty years, is the resident Brewmaster. Richard Wilson, a retired graphic artist, became the “Senior Moment” label designer. The Overlook Brew Crew consists of forty men and women, the average age over eighty.

Since 2017, The Overlook Brew Crew has brewed twenty-nine different styles of beer. The members eagerly absorb the information provided by Steve, which relates the history and details of each style they will be brewing. As word spread about this endeavor, Steve and the Overlook connected with Boston’s WCVB Channel 5 TV. Shortly after, Ted Reinstein arrived with his crew to film an episode for the “Chronicle.” He introduced the episode by saying, “I’ve just had a Senior Moment, and I really enjoyed it!”

“Weaving these brews together has a common component – yeast,” says Steve. “I utilize Lallemand Brewing yeasts almost exclusively because of their high quality and variety, and our club can rely on a successful brewing process using them.”

Though Covid-19 curtailed brewing activities, the residents’ enthusiasm, combined with ingenuity, overcame all obstacles for brewing to resume. Milling occurred outdoors; smaller groups assisted with the brewing, bottling, and labeling.

During an outdoor concert at The Overlook’s Tower Circle, our latest kegged American Amber Ale was served to all residents, garnering unanimous kudos. Additionally, The Overlook Brew Crew created a Berliner Weisse made with Lallemand Brewing’s WildBrew Philly Sour™ yeast. Now bottled, The Overlook Brew Crew members anxiously await delivery to proclaim, “I just had a Senior Moment, and I really enjoyed it!”