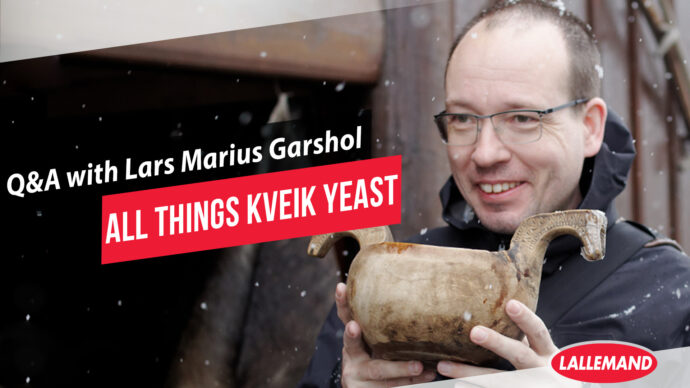 Check out our Q&A with Lars Marius Garshol, kveik specialist and author of the new book release ‘Historical Brewing Techniques: The Lost Art of Farmhouse Brewing.’ All of the questions below were asked during his live presentation, All things Kveik Yeast in partnership with Lallemand Brewing. The presentation is available on demand on our YouTube channel and you can also find it at the end of this page.

1. Generally speaking, are farmhouse ales drank still, or are they typically carbonated?

Lars – The answer is in between. They are, of course, racking the beer very early, and although it’s mostly fermented out, it’s not entirely fermented out. After the cooling process and before you serve it, you take it out of the cellar, and it works up a little bit of carbonation typically while you’re drinking it. When you think about it’s the same way that British cask ale is made and historically for the same reason when you couldn’t measure the sugar, and you didn’t have any closed containers, it was challenging to produce carbonated beer. People also weren’t used to carbonated drinks at all whatsoever. Hence, this light level of carbonation was quite exotic for people in the past.

2. Did brewers typically drink fresh and not necessarily from a finished package like a bottle, for example?

Lars – They usually racked into quite large plastic containers, and some of them would juggle these around by taking them out of cold storage and then letting them ferment a little, so they got a low co2, and then they would serve it. It varies how old they let it get, but they usually drink it all within 2 or 3 months. Sometimes though, they keep it for a year or two years.

Lars – The chemical analysis shows that it doesn’t produce a lot of diacetyl, so there is no need for that rest strangely enough.

4. What would be the best type of kveik culture to use for a lager style beer?

Lars – There is a strain of kveik that was isolated from some of the Hornindal cultures. However, we don’t know which ones. Because of a historical accident, it was called OSLO. However, it produces very clean and doesn’t have many esters or anything like that. So if you do want to make something like a lager, this one would be an excellent choice.

5. Do you know any farmhouse Brewers that are fermenting at very low temperatures similar to a lager profile?

Lars – There are farmhouse Brewers that pitch at very cold temperatures. In Finland, they used this suomen hiiva baking yeast, which gets quite wild. Therefore, quite a few of those Brewers will cool the wort down to four degrees. They will then pitch the yeast, but they don’t have any cooling so it will rise slowly to ambient temperature and fermentation will start that way. However, they do not get something like a lager beer; it’s more like hefeweizen gone crazy.

6. Do these traditional beers get sour over time, or are they too strong? Do they out-compete the lactobacillus strains?

Lars – In general, they don’t get sour over time. A good example is when I visited Sigmund to brew in 2014. Almost five years later, in the autumn of 2019, he served me that same beer. He still had the bottle of the beer that we produced when we visited him so many years before, and of course, it wasn’t the same beer anymore. It was oxidized, and some of the Kveik aromas were gone. However, it was perfectly clean; there was no acidity, no funkiness, nothing. Of course, it does happen that they get sour over time, but in general they don’t, not even the raw ales.

7. Is there anything that kveik can’t do, and is it going to be the super yeast of all future commercial fermentations?

Lars – Strangely, it doesn’t do low-alcohol beer very well. I wouldn’t do Hefeweizen or Saison with it, and maybe for some things, it’s a little bit too much ester. Although once you get to know the strain or the culture well, you can reduce ester production.

8. Is there a practice in Norway to collect second or third runnings to make lower abv beers/drinks?

Lars – Yes, historically, finding something that was safe and nice to drink was not easy and so people made strong beer, and then they always made a ‘small beer’ as well, which they would drink instead of milk, usually sour milk. After you’d done the second runnings, you could just pour cold water on and leave the mash for a couple of days and then run off stuff that couldn’t be fermented because it was too thin, but it would be sour. There would still be a little bit of nutritional flavor in it, and people would use this. They would add water over and over and maybe add kitchen scraps as well because this was also better than that sour milk stuff. If you read my book; Historical Brewing Techniques: The lost art of farmhouse brewing, you will see that this type of “drink” that I just described is probably the origins of what we know is Kvass.

9. A lot of generalities are being made with kveik. With so many strains available, where do you find the differences are mainly presenting? In aroma and flavor, but also physical behavior flocculation or other considerations?

Lars – They have historically been used almost identically throughout Norway. Concerning behavior, there are some differences, some are faster than others, some are more heat tolerant, some are more alcohol tolerant, but roughly their profile is the same. The big difference is the aroma and flavor. They are a couple of cultures that will not take the IBUs with them when they flocculate out of the beer. They can produce almost unbearably bitter beer if you boil the wort. Then you have this range of aromas with the esters. You have the orange, and then you have the Kveik number 20, Espe, with the plums and a cognac kind of flavor. You have the yeast from Stordal with a more pineapple and mango kind of flavor. You can make a fake and New England IPA with those, just a little bit of bitterness, and then let the yeast create the aroma. There is more as well, so undoubtedly there is a huge range.

10. Do you recommend giving more headspace in the fermenter during fermentation compared to a regular yeast?

Lars – Yes, definitely. Especially if you are a homebrewer because you will need that headspace, as it wants to escape the fermenter if it can, for people using a standard airlock, it may be a good idea to have a blow-off tube in case it is blown off. The fermentation can be quite violent, and also it’s typical to under pitch kveik yeast quite a lot, and then you want as much oxygen as possible as well. In fact, in that case, it’s ideal to have an open.

11. Does kveik beer benefit from maturation periods after fermentation similar to beer made with regular brewing yeast?

Lars – I think in general I would say opinion is divided on that. Some of these brewers would say no, the beer is best fresh, and other people say no, it’s much better after two or three weeks. It differs depending on the person tasting it and the culture or strain. I think many people generally would at least in some cases enjoy it more after a week or two when it’s had time to clear properly, but people are different.

12. Does juniper tend to age well, or does it change?

Lars – In my experience, it’s quite stable. It tends to last a long time. In fact, in the wort, it’s almost unbelievably stable. People in Estonia make these wooden drinking mugs that are sanded, but there’s no lacquer or anything on them. If you smell an empty one, it smells of juniper. They say that if you’ve used it for five to ten years and the flavor starts to disappear that you can just sand the inside, and then it comes back.

13. What happens if you bottom harvest a blend which has been traditionally top harvested? Does the balance of the strains alter in subsequent generations?

Lars – I should start by saying that we have no scientific experiments on this. We only have anecdotal information. In the beginning, modern brewers did have issues with this when they reused the kveik. It changed behavior, it got less attenuated or didn’t behave so well, and we suspected that this was precisely the problem. Therefore, that’s why I made the kveik registry, which describes how the original brewer uses each of these cultures and tries to teach people to do the same. It appears to have helped.

14. Is there any noticeable flavor difference between fermenting Voss at 25C versus at 40C? i.e., the banana notes?

Lars – I haven’t had banana from Voss, but it does seem that it does produce fewer esters at lower temperatures. The most significant difference appears to be when you get below 20. When you start getting down to 15 or 12 degrees, the ester profile gets more muted. I’m not sure exactly how low you can go with it, but it’s below 10.

15. Have you made bread with kveik cultures?

Lars – No, not me personally, but I know quite a few people that have and they have been pleased with the results. At least one of the farmhouse brewers have switched to making their bread with kveik and is very happy about it. It’s something to try.

16. Do you think it’s inevitable that regional cultures and traditions when it comes to these type of farmhouse brewing will die out eventually?

Lars – I guess by doing this talk, writing my book; Historical Brewing Techniques, I’m trying to make sure that doesn’t happen. It is excellent to see yeast producers such as Lallemand showing interest in kveik and producing it commercially. That tells people that the kveik that their grandfather used to have is something special. It is something valuable. I’m trying to use the interest that this generates abroad to help people in these regions see that their tradition is valuable and to motivate more brewers to take it up. However, there is always the question of the time scale. I think it’s probably safe now for another 50 years, maybe 100. After all, it is a tradition that has been in Norway for 6,000 years!

For more information about Lars, check out his blog which is devoted to sharing his discoveries and travels as he researches the lost art of farmhouse brewing in northern Europe.