A deep dive into yeast nutrition with Graeme Walker, Professor of Zymology 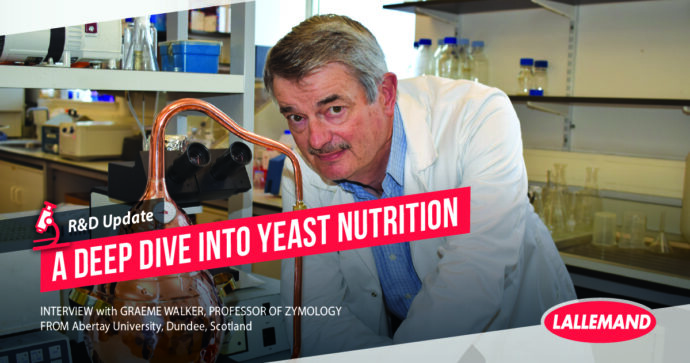 An interview with Graeme Walker, Professor of Zymology from Abertay University, Dundee, Scotland

You have a long and successful career in zymology – how did you get into yeast and fermentation as your specialty?

Graeme Walker: “On leaving High School in 1970, I was employed as a research technician with the Distillers Company Ltd (Yeast & Food Division). My job entailed setting up, controlling, monitoring, and harvesting of six 100L yeast propagation vessels. I knew nothing about yeast and fermentation before joining this company. However, I was well tutored by the late Dr. Roger Jones and became fascinated by yeast. The company sent me on day-release to college where I completed a National Diploma in Chemistry. My interest in yeast was further stimulated at Heriot-Watt University where my doctoral project involved a study of the role of minerals in controlling the cell cycles
of fission and budding yeast. My yeast research continued during postdoctoral work at the Carlsberg Foundation in Copenhagen with Prof. Erik Zeuthen. Subsequent academic positions in New Zealand (Otago University), Ireland (Dublin City University)
and since 1987 in Dundee, Scotland (Abertay University) enabled me to continue research into yeast physiology and biotechnology.”

In your career, you have fermented lots of different substrates including seaweed and most recently fava beans – what was the most challenging medium you have worked with?

G.W.: “Yes, additional interesting and varied fermentation substrates I have studied include: waste bread, spent grains, cheese whey, legume starch, marine kelp, wood chips, molasses, raspberry juice, etc. The fava (faba) beans you mention (Vicia faba), have fantastic potential as brewing adjuncts since they can grow without fertiliser, being able to fix their nitrogen from the air. This makes them very sustainable sources of starch and in collaboration with Barney’s Brewing Co. in Edinburgh, several commercial faba-based beers have been produced (eg. Cool Beans). This is a wonderful flavoursome IPA. Lignocellulosic material from plant cell wall biomass (for second-generation fuel alcohol fermentations) is the most challenging due to their recalcitrance. After all, Mother Nature designed this material for a reason! We researched novel pre-treatment methods using brewer’s and distiller’s spent grains as substrates. We showed that high frequency ultrasound showed promise in assisting the saccharification of such tough material prior to yeast fermentation. Note, however, that lignocellulose is only
considered as a substrate for bioethanol production, and I don’t know of any beverage being made from trees yet!”

Speaking of challenging fermentation media; Hard Seltzers are becoming increasingly popular. What factors do you believe should influence the brewer when selecting a yeast nutrient formulation suitable for Hard Seltzer production?

G.W.: “In the UK, Hard Seltzers only really arrived in the summer of 2020, so I don’t have a lot of experience with them. Nevertheless, brewers intending to produce Hard Seltzers may firstly choose a simple sugar source as their fermentable carbohydrate. However, close attention should be paid to nitrogen nutrition, such as a combined or sequential addition of organic and inorganic nitrogenous nutrients (eg. yeast extract and diammonium phosphate, respectively). Additional nutrients including the correct balance of minerals, especially Mg, Ca and Zn, together with accessory yeast growth factors (sterols, unsaturated fatty acids and vitamins) can push such fermentations beyond 15% ABV.”

Over recent decades, what do you consider to be the most interesting research advances in the subject area of yeast nutrition for the
improvement of alcoholic beverage fermentations?

G.W.: “Basic research into yeast nutritional physiology has somewhat taken a back seat over the recent years. It is just not a sexy enough topic to attract younger researchers (and funding!). There are much more appealing yeast areas for research nowadays – gene editing, synthetic biology, strain engineering – and very few yeast physiologists exist. This redundancy is unfortunate, as we still have much to learn about the nutrition, growth and metabolism of yeast for beverage fermentations. For example, do we fully understand the role of “minor” nutrients in brewer’s wort? They are certainly not of minor importance. In the past research was mainly focused on efficiency and fermentation speed, but beer flavour is of paramount importance for the consumer. Therefore, there is a need for further research into the impact of yeast fermentation nutrients on beer organoleptic quality.”

You are recognized as an expert in the role of minerals in yeast health and fermentation and in particular magnesium and zinc. What would you say is the single most important consideration and have there been any new findings lately?

G.W.: “Thank you for your kind comment. Our previous work on metal ions did reveal some new information and raised some insightful questions which I contend are of pertinence for practical brewers, large and small. For example, is there sufficient “bioavailable” magnesium in brewer’s wort for consistent and efficient fermentation? Is there too much free calcium ions in wort for good yeast fermentation performance? What is the zinc status of re-pitched yeast, and could this impact on sluggish and stuck fermentations? Will mineral pre-enrichment of yeast, or “preconditioning” help yeast withstand the rigours of industrial fermentations? What happens to beer flavour if I
supplement my fermenter with certain minerals? Of course, the answers will be found in my previous publications! In recent years I have moved away from studying minerals and have focused on other areas, including killer yeasts, bioethanol yeasts, molecular biology of flocculation, non-Saccharomyces yeasts for whisky fermentations, and legume starch as brewing/distilling adjuncts.”

For more information on yeast nutrition: