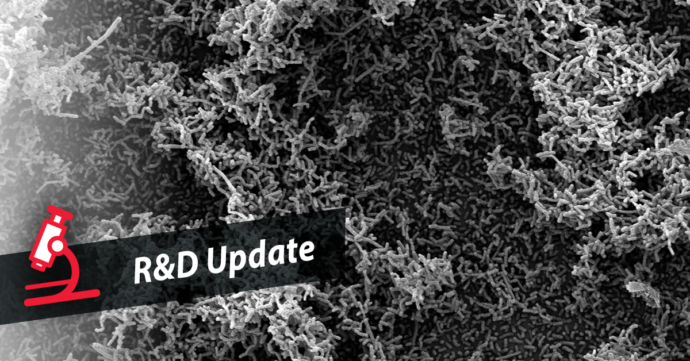 Sour beers are characterized by the presence of a significant concentration of naturally occurring organic acids, a low pH (< 4.0), and refreshing flavor. Not by coincidence, these beers trend towards traditional styles reminiscent of the pre-microbiology era of brewing. Such styles include spontaneously fermented Lambic and Flanders ales, as well as kettle-soured styles such as the Berliner Weisse and Gose and are highly influenced by wild lactic acid bacteria (LAB), acetic acid bacteria (AAB) and wild yeasts (1,2,9,15). Indeed, what we can consider “traditional” kettle souring practices likely date back to around the late 1800’s and onward – when microbiology was starting to be taken seriously as a natural science and the advent aseptic technique allowed for pure culture collection and use. The act of pre-souring a wort is divergent of the truly traditional and ancient practice of spontaneous beer fermentation, like those used in the preparation of the famous Belgian acid ales.

Organic acids offer a wide range of sensory characteristics, and are common food additives used to boost flavor perception, extend shelf life, and aid in texture stability (4,13,14). As functional food components, the concentration, and matrix will affect physiochemical properties and organoleptic perception of many organic acids. Lactic acid is typically the most abundant organic acid found in sour beers, with some exceptions (e.g. Flanders Red ales where acetic acid may dominate). Multiple species of organic acids will be present as well, in varying concentrations due to a combination of microbial metabolic activity, raw materials, and stochastic chemical reactions. These include acetic, citric, succinic and malic acid and play an integral role in the stylistic approach for many beers (6).

Gustatory response can be highly influenced by volatile organic compounds and carbohydrates (10). In beer, organic acids tend to have greater sour perception than mineral acids, as at beer pH most of the relevant organic acids will remain protonated. Protonation is an important chemical state that allows diffusion across taste-receptor membranes, eliciting a strong sour response (12).

Lactic acid tends to be perceived as a smooth tartness, lacking a distinctive flavor at lower concentrations, and is detected more based upon the physiochemical response to “sour” or “acrid” (5). Whereas, acetic acid is sharp and puckering, with a distinctive “vinegar” or “body odor” aroma and flavor (14). Minor acid components, such as citric and malic acid are closely associated with unripe fruits, and have an intense sour perception, often described as “green” (8,11,14). Succinic acid, while not as abundant as the other organic acids, is an important intermediate produced by mitochondria and bacteria as part of the reductive branch of the citric acid cycle (TCA) and believed to come primarily from malt and stressed microorganisms. It plays a role in vegetal flavor perception and generally not well received in brewing applications (3,16). As part of complex, living systems, organic acids will develop at varying concentrations.

However, the physiochemical gustatory response to organic acids is highly complex and often cannot rely on single measurements to ensure the highest quality or targeted style of beer. This can be demonstrated through beer chemistry: 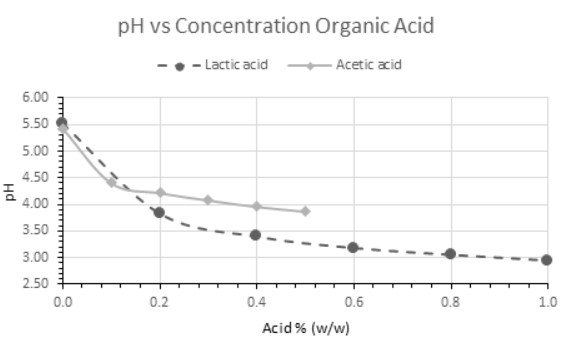 Under typical circumstances, lactic acid produces a greater drop in pH than acetic acid at equal concentration. This is partially due to the physiochemical properties of these acids, with lactic acid being approximately ten times stronger than acetic acid, and the natural buffering capacity of a typical beer wort. These intrinsic properties highlight the importance of combining both sensory and analytical techniques – such as maintaining a robust sensory panel and regular measurements of total titratable acidity (TTA).

Additionally, acetic acid has a lower sensory threshold ( x̄ = 140 mg/L) relative to lactic acid (x̄ = 686 mg/L) (13,21,42). Thus, in the background of even moderate concentrations of lactic acid (~0.10% w/v), the presence of acetic acid is well above the average sensory threshold and may not produce a change in pH, thereby going undetected in the absence of a robust sensory and QC program.