What are thiols and their role in hop biotransformation? 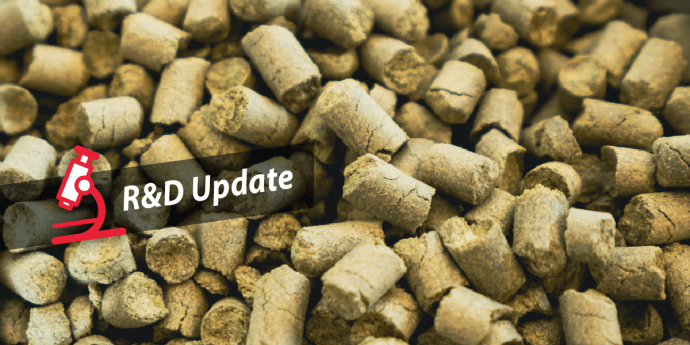 The interaction between yeast and hops during fermentation, better known as hop biotransformation, is a complex process that is currently of great interest to the brewing community. This biochemical process encompasses many types of reactions, such as:

These reactions are catalyzed by different enzymes produced by the yeast during fermentation. The β-glucosidase enzymes that release aromatic terpenes are well characterized in brewing yeast, and pure forms of this enzyme (i.e. ABV AROMAZYME) are available to boost this activity during fermentation. The β-lyase enzymes responsible for releasing thiols have been less studied but are gaining interest in the brewing community due to their ability to contribute unique, tropical fruity aroma profiles. This article introduces the reader to the basics of thiols and how they can be released using LalBrew® Premium dry yeast strains.

What are thiols? Thiols are a family of sulfur-containing aroma compounds naturally found in hops, either as free aroma-active volatiles or as non-aroma-active (i.e. non-volatile) precursors. They represent only 1% of the total hop oil composition and are categorized as the sulfur fraction. Despite their low concentrations, thiols have very low sensory detection thresholds, meaning they are perceived at exceptionally low concentrations.

The main aroma-active thiols are:

Because bound non-volatile thiols exist as an amino acid moiety, the liberation of thiols through β-lyase activity plays an important role
during periods of nitrogen scarcity for yeast. Figure 1 demonstrates the primary liberation mechanism of β-lyase, wherein bound, non-volatile thiols are released through nitrogen-mediated enzyme expression of the IRC7 gene. Lower nitrogen concentrations present in grape must promote IRC7 expression, and, therefore, β-lyase activity tends to be high in wine fermentation. The higher nitrogen levels present in
brewers’ wort tend to repress IRC7 gene expression and reduce β-lyase enzyme activity. To promote thiol production in beer fermentations, it is important to choose a yeast strain known to have high β-lyase activity.

Figure 1. β-lyase enzyme mechanism and the IRC7 expression. Not all brewing yeast have this ability. In this example, 3MH (an aromatic thiol) is released from a non-aromatic precursor.

Which strain produces the most β-lyase enzyme?

Each brewing strain has different enzymatic activities, suggesting that some are more suitable for releasing bound thiol precursors than others. At the Lallemand Brewing R&D Labs, we have characterized our LalBrew® Premium brewing yeast strains for β-lyase activity (Figure 2). By sharing this technical information, we provide brewers with tools to decide which strain would fit best in their recipes to promote thiol production. 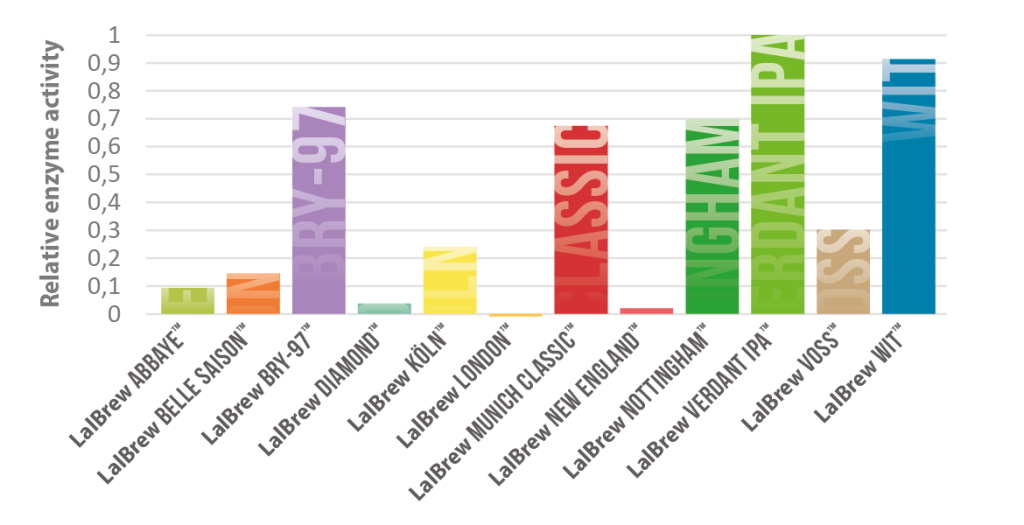 *β-lyase activity was measured by growth

Thiols are, despite their low concentrations, a fascinating group of aroma compounds that should be further explored in brewing. The wine industry has led the research on thiols and researchers are just beginning to explore β-lyase enzymes in the brewing industry. Recent research suggests thiol precursors are not only found in hops but also in malt (see other resources below), suggesting great potential for brewing yeast to release aroma compounds in beer from non-volatile precursors.

Brewers are always pushing boundaries in terms of new recipes and ingredients, looking for better quality beers and tropical-like flavors to attract customers. A greater understand hop biotransformation, thiols and β-lyase enzymes will certainly be a major contributor to brewing trends in the years to come.

Schönberger, C and Dagant, L. (2020). Development of Thiols and Thiol Precursors in different Hop varieties during Hop Harvest and their impact on beer flavor. Presentation at the Craft Brewers Conference 2020. https://www.brewersassociation.org/wp-content/uploads/2020/05/CBC-Online-Seminar-Presentation-Development-of-Thiols-and-Thiol-Precursors-in-Different-Hop-Varieties.pdf

If you want to know more about bound thiols in hops and malts, feel free to check out these resources: