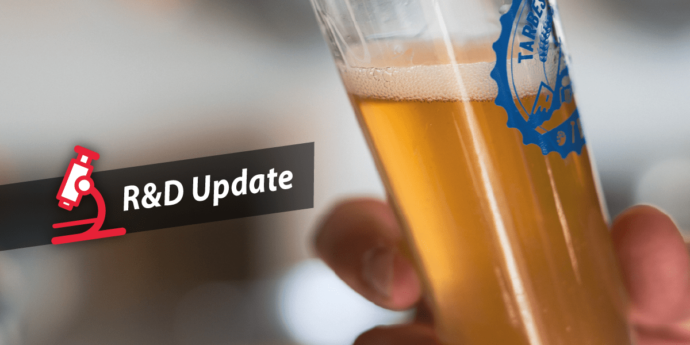 Lager is one of the most popular beer styles in the world. Light in color, crisp and refreshing, it has a delicate, clean and balanced flavor profile. The recipe for lager brewing may appear simple, but this simplicity is deceptive. Sensory defects cannot hide behind the complex flavors of malt and hops − laying bare every potential misstep in ingredient selection, sanitation, mashing, boiling, fermentation, maturation and filtration.

The most defining ingredient of the lager style is the Saccharomyces pastorianus yeast – a natural hybrid of S. cerevisiae and S. eubayanus that was selected and domesticated in European lager breweries over hundreds of years. Traditional lager strains ferment at lower temperatures resulting in clean and neutral profiles with low levels of esters and fusel alcohols. Modern yeast breeding techniques have been used recently to select novel S. pastorianus strains with ideal characteristics for lager styles. Find out more in our Lager Strain Selection bifold, here.

Ingredient quality and freshness are important since there is no single dominating flavor or aroma in a lager. The quality and characteristics of the water, malt, hops and yeast all play an important role. The water profile traditionally used for lager production is very soft. Light kilned malt should be well-modified to avoid problems with FAN deficiency and DMS off-flavor. Traditional lager beers were brewed with local varieties of noble hops from Germany and the Czech Republic. The intense tropical or citrus notes of many American hops are not appropriate for delicate lager styles.

Mashing method (step mash, single infusion, or decoction) should be chosen based on your equipment and the quality of the raw materials you use. An adequate level of FAN will ensure healthy fermentation and help the yeast to remove some off-flavors such as diacetyl, H2S, and
acetaldehyde.

A well-crafted lager is expected to be crystal clear despite the recent popularity of hazy beer styles. Vigorous boiling helps form proteinpolyphenol complexes that can be separated from the wort, so they do not affect the clarity of the beer. Finings, such as carrageenan, can be added to the kettle where they bind soluble proteins that contribute to haze. An active boil will also reduce the amount of DMS, the precursor of which is more abundant in the light-kilned malt usually used for lager production.

To ensure healthy fermentation and avoid off-flavors, special attention should be paid to pitching rate and proper maturation period. Lager fermentations require more yeast compared to ales, generally 1.0-1.5 million cells/ml/°P. Addition of nutrients can impact beer quality by supporting yeast health. Many off-flavors are produced as by-products of yeast fermentation, and these can be removed by the yeast as well during the maturation period. A diacetyl rest is normally performed closer to the end of fermentation by raising the temperature of the beer by a few degrees to keep the yeast active and in suspension in order to remove unwanted flavors such as diacetyl, H2S and acetaldehyde. Underpitching or poor nutrition may result in slow fermentations and premature flocculation, which will reduce the ability of the yeast to reabsorb off-flavors.

Normal yeast management best practices apply to lager production. Harvest only the middle creamy layer of yeast and store it at 2-4°C (36-39°F) for no longer than 48-72 hours. Check yeast viability and cell density before pitching to the next fermentation vessel, and limit re-pitching to 8-10 generations to avoid mutations causing under-attenuation, reduced flocculation, flavor defects and other issues.

Enzymes and process aids like beer clarifiers, antioxidants and stabilizers can help brewers achieve greater clarity and shelf life, especially when a filter or centrifuge is not available.

Lager is the most popular beer in the world with its demand and acclaim having stood the test of time. Brewing with careful consideration for ingredients and brewing process pays respect to this iconic and traditional beer style.