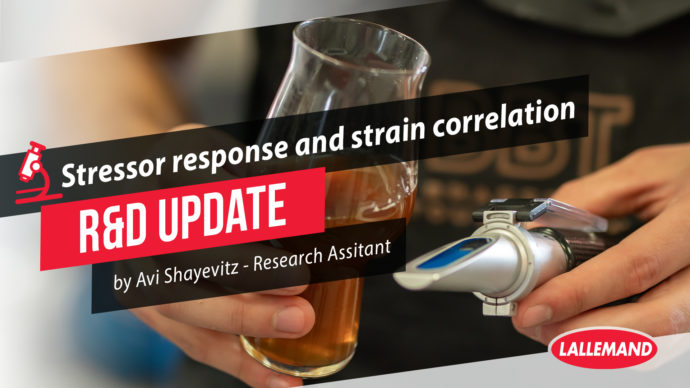 No matter the domain of life, stress is a constant. Whether that be from specific external stimuli or the general possibility of damage, life has evolved response mechanisms to help organisms cope with stressful situations. In humans, overt stress may activate metabolic pathways that boost the production fight-or-flight hormones. In bacteria, chemical stress may trigger temporary physical changes in protein structures to increase odds of survival. These are singular examples of a diverse, complex, and well-coordinated response honed over millions years of selective pressures and evolution. The common factor, however, is increased production of secondary metabolites in direct response to stress stimuli; i.e. compounds that are produced by, but not directly involved with normal cellular growth cycles.

In ethanol technology humans have learned through trial and error to harness the stress responses of Saccharomyces cerevisiae in the production of flavorful and creative forms of expression manifested as beer. As with any other ingredient used in brewing, yeast is very important. Arguably the most important. The final flavor and aroma of a finished beer is a delicate interplay of hundreds of volatile compounds, nearly all of which are secondary metabolites produced during fermentation processes. What makes S. cerevisiae remarkable is the immense intra-species diversity found among domesticated variants. Much like our second oldest companion, Canis lupus familiaris, this diversity is driven by adaptation to specific jobs – or, rather, styles. Hence, for example, the peppery and spicy flavor of Saison yeast versus the clean, crisp flavor of a pale ale yeast.

Thus, it is here at the core of Lallemand’s testing and selection regimen for novel strain application that stress plays a vital role. In brewing, environmental stress is split into four primary categories: pH, osmotic, temperature, and ethanol. This is a targeted, multifaceted approach in which a battery of genetic and practical field tests are performed. Potential candidates undergo genotyping to determine origin. They are then tested in-house according to rigorous protocols established by both the European Brewing Convention (EBC) and the American Society of Brewing Chemists (ASBC). Laboratory-scale fermentations are performed, and the trial beer is then subjected to sensory evaluation by lab personnel while quantifiable data on stressor response metabolites are collected using High Performance Liquid Chromatography (HPLC) and Gas Chromatography (GC). Finally, the metadata analysis will reveal ideal applications for selected yeast strains where industry partners perform pilot-scale brews in preparation for the final and toughest test: consumer reception.

Sign up for the WeBrewWithYou newsletter to keep updated