A description of β-glucosidase & β-lyase

“As brewing scientists and brewers look deeper into the drivers of hop aroma in beer, we realize that it is not simply a process of extracting hop oil from hops and transferring it to beer. There are physical and biochemical interactions with and by yeast that also impact hoppy aroma in beer. While hop oil is the main source of hop aroma, there are water-soluble components than can be acted on by yeast-derived enzymes which contribute to beer aroma. As such, yeast selection and concentration are tools a brewer can use in combination with hop variety and timing of hop addition to impact hoppy aroma in beer.”

Biotransformation is a buzzword nowadays in brewing, which can be sometimes confusing due to the complex biochemical processes involved. It is defined as ‘the chemical modification made by an organism on a compound’.

Although this term is commonly used in pharmacology and toxicology, from the brewer’s perspective, it refers to the interaction of two ingredients used in brewing: yeast and hops. Brewing yeast produces two different enzymes during fermentation: β-glucosidase and β-lyase, which will be discussed in the following lines, both playing a role in biotransformation with the release of aromatic compounds or volatiles.

The role of β-glucosidase
β-glucosidase is an enzyme able to cleave glycosides, a compound found in hops that does not contribute in beer aroma per se. As a result of that, the glycoside molecule is broken via hydrolysis into two parts: a monoterpene alcohol and a glucose. An example is shown in Figure 1, where a non-volatile terpenyl glycoside is hydrolyzed through the β-glucosidase activity resulting in the release of a monoterpene alcohol (linalool) and a glucose molecule. There are many monoterpene alcohols which impart diverse flavors, such as citrus, fruity or floral, and higher levels of terpenes are associated with greater overall hop aroma intensity (OHAI).

However, β-glucosidase activity depends on each yeast strains genetic background. The addition of exogenous and concentrated β glucosidase enzymes was studied (Sharp et al., 2017), and demonstrated the interesting potential to enhance biotransformation reactions. 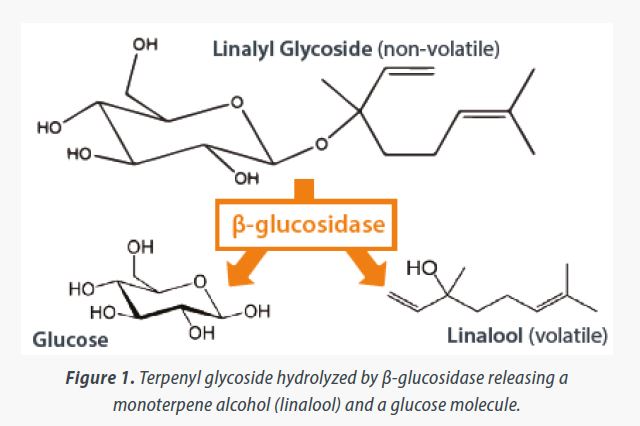 The role of β-lyase
β-lyase is an enzyme responsible for the release of volatile sulfur compounds called polyfunctional thiols, or mercaptans, which are usually associated with tropical aroma. Thiols are aromatic compounds found in hops and represent about 1% of the total hop oil content. Despite of their low concentration, their contribution to aroma in beer is significant due to their low detection threshold. In addition, hop also contain thiol precursors which does not impart any flavor, but through β-lyase activity these highly aromatic compounds can be released and, therefore, perceived by the consumer. An example is illustrated in Figure 2. 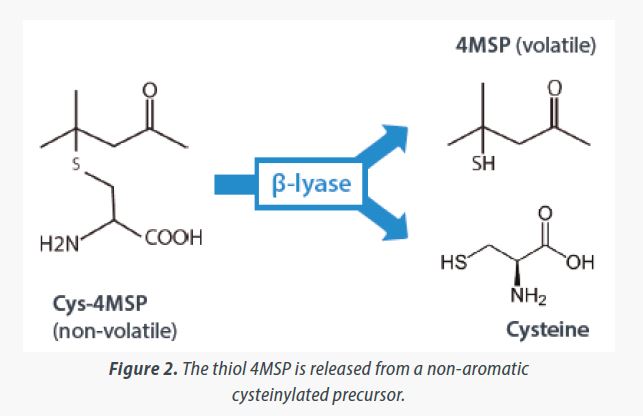 Biotransformation is something fascinating although it is yet not fully understood due to its complexity. However, it is a fact the enzymes detailed above play a role during fermentation by altering the hop oil composition, and so the organoleptic profile of the resulting beer. Brewers might also consider the addition of exogenous enzymes to promote biotransformation – such as ‘Aromazyme’, the soon to be released β-glucosidase product from AB Vickers.