With an increasing demand for hop aroma in beer than ever before, Lallemand Brewing is delighted to announce the release of ABV AROMAZYME, an enzymatic solution resulting from an exciting project that has involved different breweries at global scale.

One of the very first breweries involved in the project was Naparbier, a craft brewery located in small town of Navarra called Noain (Spain). Towards the end of 2018, we visited Naparbier with some samples and use it in a Brut IPA, when this beer style was still a trend. During the study design, we split freshly produced wort into two different fermenters, one with ABV AROMAZYME and the other one without (control batch). Once the beer was ready for packaging, we received the following feedback from Juan Rodriguez, masterbrewer at Naparbier: Treated batch is “cleaner” whereas the control batch is still “green”. 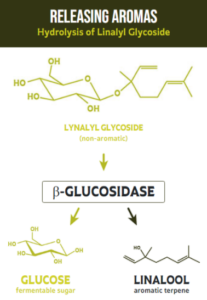 After that, we asked them for packaged samples which were sent to Mascoma, a Lallemand-owned lab located in United States. There, we conducted terpene analysis as well as sensory. The results concluded that there was a clear increase of monoterpene alcohols, as a result of the hydrolysis reaction of hop glycosides, and a clear preference with the beer treated with the enzyme in a blind tasting.

After this and other several trials worldwide, we are now pleased to offer you ABV AROMAZYME, a food-grade enzyme preparation composed of β-glucosidase enzymes that are capable of hydrolyzing the glycosidic bonds, liberating monoterpene alcohol compounds and glucose. Derived from a selected strain of Aspergillus niger, this product has been developed to increase the complexity of the hop aroma and flavor profile in beer.